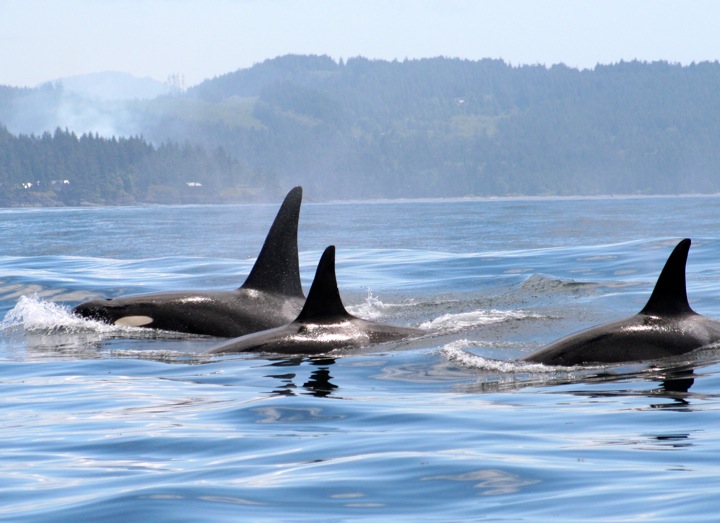 With their bold black and white markings, killer whales are one of the most easily recognized cetacean species. They’re found in all the world’s oceans and are what you’re most likely to see when whale watching in Victoria BC.

But even though orcas are visually distinctive, not a lot of people know what they sound like.

Here at Eagle Wing Tours, we use advanced hydrophone technology to listen to the whales whenever possible. This gives passengers the chance to hear the orcas’ unique underwater conversations in real time—an unforgettable experience.

Your whale watching captain and crew will explain exactly what you’re hearing, but it’s helpful to know what to listen for before you head out on the water.

You can hear what killer whales sound like below and learn more about orcas on our website. We’ve posted several audio clips of the different species that we see off the coast of Vancouver Island (resident, transient and offshore killer whales). You can even download the files so you can listen to them whenever you want – if you’re whale geeks like us.

Why killer whales make these sounds

Killer whales in British Columbia mainly live in darkness. Light doesn’t reach very far down in this part of the world, so they use sound to navigate and talk to each other. They vocalize regularly while going about their various activities.

The clicks you hear are the sounds orcas use to echolocate (search) for food and other underwater objects. The other, more high-pitched sounds are calls that the whales use to communicate.

Unlike people, killer whales don’t have to use their mouths to make sound. Instead, they use a specialized mass of fatty tissue known as the melon. The melon is located in the bulbous forehead of the whale, between the blowhole and the snout. When the whale forces air in and out of the melon’s complex network of passages and cavities, sounds are produced.

Do killer whales have different vocabularies?

Transient orcas vocalize significantly less than residents because they normally don’t use sound while foraging for food. Residents will send out calls to other residents and use sonar clicks to locate their prey. Transients, on the other hand, usually hunt silently, listening and looking for their prey.

While out on your whale watching trip in Victoria BC, you’re mostly to hear resident killer whales.

Photographing whales: what to know before you go

By Val Shore Whale photography can be challenging even for seasoned photographers. After all, you’re…

Seven key things to know before your tour!

Thinking of going whale watching while you’re in Victoria? We’re guessing you have many questions.…