Although often overlooked, there is an abundance of marine birds inhabiting the Salish Sea. From the common murre to the elusive tufted puffin, Eagle Wing Tours is committed to introducing you to a diverse and captivating variety of feathered fauna. Below we have outlined a few of the avian species that we may encounter on the Salish Sea, and some fast facts about them.

1. Common Murre: This penguin-like bird is highly adapted for swimming. It dives to hunt for schooling fish, such as herring or cod, using its wings for underwater propulsion. The common murre is able to dive over 590 feet below the surface, making it one of the deepest-diving birds in the world.

2. Pigeon Guillemot: Often found close to rocky shores, the pigeon guillemot is known for its bright red feet and bill-lining. Although black in colour for most of the year, they take on a mottled-white plumage with the arrival of winter. Like the murre, the guillemot uses its wings to propel itself to depths of up to 150 feet underwater.

3. Bonaparte’s Gull: This is a unique type of gull in that it regularly nests in trees. The vast majority of Bonaparte gulls breed in the boreal forests Canada and Alaska with only 5% of the population reproducing elsewhere. Unlike other gulls, this species rarely scavenges on dead animals and stays away from garbage dumps. Their diet consists of insects, invertebrates, and small fish.

4. Cormorants: We are privileged to see three types of cormorants on our tours. The pelagic cormorant is the smallest of the variety. Don’t be fooled by its name—this bird is much more likely to be found inshore than on the open ocean. Pelagic cormorants use their guano (feces) to glue their nests to vertical cliff faces. The double-crested cormorant is a large waterbird that is identified by its hooked upper bill and the yellow-orange colouring on its face. This cormorant dives to feed on small fish and the occasional crustacean, and is sometimes observed on freshwater lakes. The final cormorant that can be observed on the Salish Sea is the Brandt’s cormorant, which, unlike the double-crested cormorant, is found only in marine environments. They are often seen in kelp beds where they dive to feed on fish. Breeding members of this species have a vibrant blue throat patch.

5. Tufted Puffin: With its large head, white face, and long head plumes, the tufted puffin is very distinctive in appearance. When feeding chicks, this bird is known to hold up to 20 fish at a time in its orange bill to be taken back to the nest—adults without young eat underwater. Puffins dig into slopes to make nesting burrows that are up to 5 feet deep.

6. Black Oystercatcher: The oystercatcher is a vocal bird with red colouring that adorns its long bill and the skin around its eyes. Despite its name, the oystercatcher does not in fact feed on oysters. It prefers mollusks such as mussels and limpets. This bird is quite territorial, and its high-pitched whistle is frequently heard.

7. Osprey: The osprey is an impressive raptor in that it is able to dive underwater to catch live fish. Before diving talons-first to make a kill, they will often hover directly above their target. They are deft predators and some individuals succeed in their hunts up to 70% of the time. From below, this large hawk can be recognized by the “M” outline its wings make.

8. Bald Eagle: The bald eagle is a charismatic raptor observed frequently in the many ecosystems of the Salish Sea. Young bald eagles do not develop the white plumage on their head and tail that is characteristic of this species until they are around 5 years old. Bald eagles feed primarily on fish, whether it be salmon, herring, or rockfish. The largest recorded bald eagle nest was located in Florida, and was 9.5 feet in diameter and 20 feet tall.

9. Turkey Vulture: Smaller only than eagles and condors, turkey vultures are large raptors. Their plumage is dark brown and their head is completely featherless to make feeding more efficient. Turkey vultures are primarily scavengers, feeding on the dead flesh of animals, but they will occasionally forage on vegetation. When in flight, they are easy to recognize from below due to their pale flight feathers which create a two-toned pattern. This bird has few predators and, when threatened, uses vomiting as a defence mechanism. The vomit that they cough up is a pungent and very effective deterrent.

10. Great Blue Heron: Despite weighing no more than six pounds, this heron is the largest of the North American heron species. Great blue herons are found in both freshwater and saltwater environments. You may be lucky enough to spot one balancing, statue-like, on top of a kelp bed, waiting for fish to pass by. They will also prey on amphibians, small mammals, reptiles, insects, and even other birds.

Join us in celebrating Earth Day!

Dall’s porpoises—they’re lean mean speeding machines. Known for its agility and playfulness, this species is… 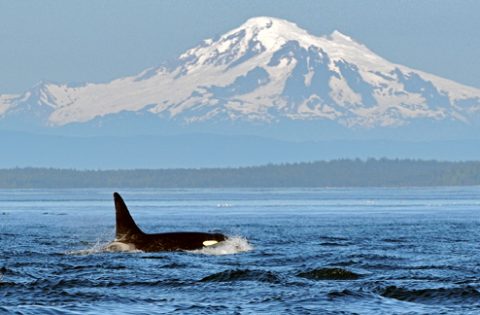 Whale Watching with Kids: What to Know Before You…

If you’re in search of the ultimate family-friendly adventure, look no further. Whale watching around…