They’re marathon travellers, expert bottom-feeders, fierce mothers and resilient survivors. And sure, with their odd, bow-shaped heads and blotchy, crusty skin they might not win any whale beauty contests.

But we love them anyway. Pacific grey whales are one of the four whale species we may encounter on our whale watching tours from Victoria, and we get very excited when we spot one!

Right now, these slow-moving giants are heading north from the warm waters of their breeding lagoons in Baja Mexico to feeding grounds as far away as the Bering, Chukchi and Beaufort Seas. That’s an epic round-trip journey of 16,000 to 20,000 km—one of the longest migrations of any mammal on Earth!

In celebration of this astonishing feat, here are eight things that may surprise you about the whale known to science as Eschrichtius robustus.

Okay, they’re not the biggest whale in the ocean. They rank eighth on the world whale scale, just behind humpback and sei whales. But 35 tons and 15 metres sounds pretty big to us. Some individuals are even bigger than that. Stack five male African elephants onto a scale and you get the picture.

2. They come with hitchhikers

Grey whales are, well, grey with whitish blotches. They weren’t born with most of those blotches though. The skin—especially around the head, flippers and tail—is home to clusters of round, white barnacles. Up to 400 lbs. of them! And crawling among them are orange whale lice—each about the size of one of our thumbnails. Up to 100,000 lice have been found on a single whale!

Grey whales are baleen whales, which means they don’t have any teeth. Instead, they filter their food through baleen plates that hang down from the roof of their mouth. Baleen is made of keratin, the same as our fingernails. Grey whales have 130-180 pairs of short baleen plates—the fewest of any baleen whale.

No other whale feeds like the grey whale. Sure, they occasionally skim-feed on zooplankton and crab larvae near the surface. And sometimes they like to slurp herring eggs off eelgrass and kelp.

But their main restaurant is on the seafloor. There, they become giant vacuum cleaners, sucking up tiny critters—such as amphipods, worms and crab larvae—that live on, in or near the seafloor. The whale dives to the bottom, turns on its side and scoops up a mouthful of critter-filled muck. It then strains out the muck through its baleen, leaving a distinctive plume of sand and mud in its wake.

Fun fact: grey whale baleen is usually worn down on the right side, so it looks like most of them are “right-handed!

Some grey whales didn’t get the memo and don’t bother going all the way back up to the Arctic on their northward migration. Seriously, why swim all that way when there’s an all-you-can eat buffet along the way? Like other baleen whales, grey whales fast for months during their southward migration or the breeding season. By early spring, they’re pretty darned hungry.

So some of them stop along the route, sometimes for the entire summer. About 100 resident grey whales stay to feed on the BC coast. Several years ago, a grey whale poked around Victoria’s Oak Bay all summer long! And every spring, a dozen or so grey whales regularly take a detour into Puget Sound (south of Victoria), where they gorge on ghost shrimp and are known locally as “Sounders.

Females give birth to a single calf, usually toward the end of the southbound migration in late fall. Newborns are about five metres long and weigh up to 900 kg—the equivalent of 10 baby elephants! They grow fast on milk that is about 53% fat and are weaned at about seven months.

As mothers go, grey whale moms rank right up there. They’re fierce defenders of their young. They have to be. Up to one-third of calves in any given year fall prey to killer whales. Mothers sometimes have to be inventive. Years ago, one upside-down mom was seen cradling her baby on her tummy to keep it away from attacking killer whales.

Mommas especially don’t like it when humans poke harpoons into their babies, which is what 19th-century whalers did in the breeding lagoons with ghastly efficiency (see #8). She’d fight back (go figure!), which is why whalers nicknamed them “devilfish.”

6. They once had an Atlantic cousin

Our reality is that grey whales are found only in the North Pacific. But if you’d been alive more than 300 years ago on the Atlantic coast, you might have seen an Atlantic grey whale. Their ‘hood was the coasts of North America, Europe and Iceland. But living that close to blubber- and meat-loving humans is never a good thing. Out came the harpoons, and by the early 1700s the whales were all gone. Forever.

But wait. Wasn’t there a grey whale photographed in the Mediterranean Sea in 2010? It caused quite a kerfuffle. Had the Atlantic grey whale survived after all? Nice thought, but no. Scientific pundits decided it was an intrepid Pacific grey whale that had crossed into the Atlantic via the newly opened-up Northwest Passage.

Was that—pardon the pun—a fluke? Apparently not. In May 2013, a different individual was spotted off Namibia—the first time the species has ever been seen south of the equator. And already in 2021, a grey whale has been seen off Morocco.

Don’t for a minute think that the Pacific grey whale escaped the harpoons. Over a 150-year span, these whales came dangerously close to extinction—twice. Commercial whalers slaughtered them by the thousands on their migration and in the breeding lagoons. By the early 20th century, there were only 2,000 or so left on the planet.

Following protection in 1946, grey whale numbers steadily climbed to more than 20,000. But still, there is concern. Since early 2019, grey whales have been dying in the hundreds along the Pacific coast in what scientists call an Unexplained Mortality Event, or UME. As of spring 2021, the population has dropped by as much as 24% over five years.

It’s not known what’s driving this decline. Because many of the dead whales are skinny or emaciated, researchers are looking at whether ecosystem changes in their northern feeding grounds—possibly caused by climate change—are affecting their habitat and food supply.

While this situation is troubling, no one is hitting the panic button yet. Grey whale numbers do fluctuate over time. In 1999-2000, for example, there was a very similar UME, and they rebounded from that. If there’s one thing that grey whales have shown us repeatedly over the centuries, it’s that they are survivors!

8. They can be famously “friendly”

In their northern feeding grounds, grey whales are obsessed with food. But not in the warm breeding lagoons of Baja Mexico, where making babies and cavorting is the name of the game. And when they get bored with that, they sometimes play with the humans.

Imagine leaning out of a small boat, or panga, and touching the barnacle-encrusted head of a grey whale. Well, you don’t have to imagine it. You can go to one of the breeding lagoons in Baja Mexico and do just that. It’s the only place in the world where humans and wild whales intentionally seek each other out to make contact.

Access to the lagoons is strictly regulated, with inner sanctuaries reserved just for the whales so they can choose whether or not they want to interact with humans. And this they do with astonishing curiosity and trust. Some individuals seem to crave the touch. Even mothers will push their babies toward the pangas for a scratch!

It’s a magical, mind-blowing experience for us, but what do the whales get out of it? What’s going on in that big brain? Why do they trust us? Well, we’re not grey whales so we don’t know. But what it does tell us is that we still have much to learn about these gentle giants of the Pacific!

To book a tour and perhaps see a grey whale for yourself, give us a call or book online!

Seven things that may surprise you about elephant seals!

Jan. 16, 2020 They’re massive, goofy-looking and make sounds like no other animal. They’re also… 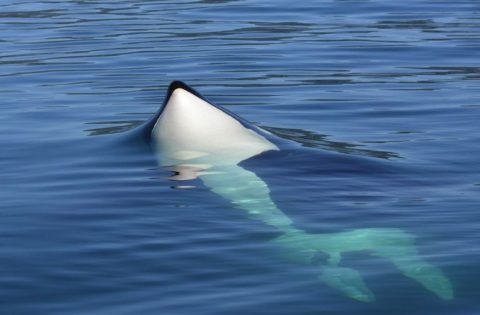 This is How Killer Whales Sleep Without Drowning

Orcas spend their entire lives at sea. It’s where they’re born, where they feed, where… 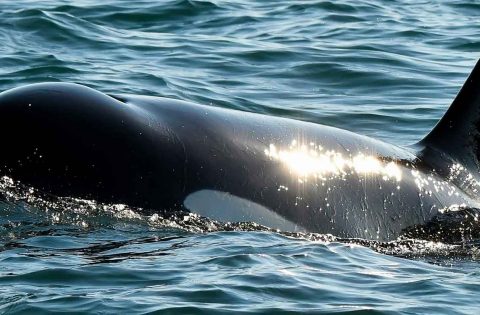