THE PRIZE FOR THE TUBBIEST NEW YEAR’S BABY in the Victoria region surely goes to Bertha, the proud new mum of a 30-40 kg (66-88 lb) bundle of joy.

Relax. Bertha is a northern elephant seal and she’s making news because a webcam is sending images of her maternal moments around the world. Bertha and new baby—born the night of Jan. 13—are hauled out at the Race Rocks Ecological Reserve, about 15 km southwest of Victoria.

For those of you who have been on our tours—or who we hope to see soon—Race Rocks is one of those magical places that we love to take our passengers. It’s the site of BC’s second oldest lighthouse, and it’s teeming with life—above and below water—thanks to strong, nutrient-rich tidal currents.

There are many days when we can show you four species of pinniped at Race Rocks—including harbour seals, two types of sea lion and…northern elephant seals.

These lumbering giants have been regular visitors to Race Rocks since the mid-1990s and are now present pretty much year-round. They don’t come in big numbers here—last summer, 15 were counted on the rocks at one time—but their impressive size makes up for the sparse numbers. More on that in a minute.

WHAT’S REALLY GOT EVERYONE EXCITED is that they appear to have established a small new breeding colony at Race Rocks. Bertha’s new baby is living proof, and it’s not her first. In 2009, she popped out the first pup ever seen at Race Rocks. Several other females have given birth there too.

This makes Race Rocks the only known place in Canada where elephant seals breed.

Most of Bertha’s female kin give birth to their pups on islands off California and Baja Mexico at densely packed breeding colonies, where the enormous breeding bulls engage in violent and often bloody battles over groups of females.

Two adult males have been documented in recent years at Race Rocks, dubbed Misery and Chunk. They were seen sparring with each other in July 2013, and Misery has not been seen since. Chunk now rules!

On the boat, elephant seals are one of the coolest marine animals to talk about. They’re one of the ocean’s greatest athletes. They’re marathon travellers. And they are survivors from the brink of extinction.

Check out Bertha at http://www.racerocks.ca/video-cameras/camera-1-race-rocks-lighthouse/

Note: the camera may not work consistently, but you’ll find lots of other information here about the Race Rocks elephant seals. And check out the other Race Rocks cameras too!

Be safe. Be kind. Have fun! Throughout the COVID-19 pandemic the health and safety of… 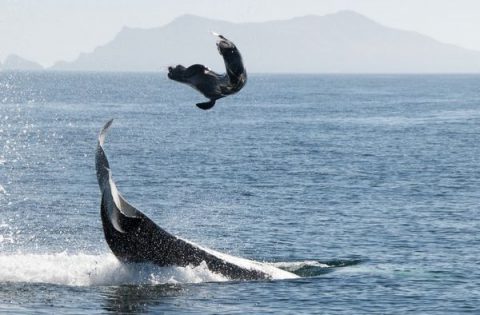 Why Do Killer Whales Go Through Menopause? (And Other…

Looking for answers to your most burning killer whale questions? You’ve come to the right…

Not too long ago, it wasn’t easy being a whale. In addition to being hunted…