The giant Pacific octopus (Enteroctopus dofleini) is a fascinating creature. Found throughout the coastal North Pacific, this charismatic invertebrate thrives in the cold, productive waters off the BC coast.

Let’s just get it out there right off the bat—this species holds the record for the largest octopus in world. With an average arm-span of 16 ft. across and weighing around 110 lb., they’re bigger than some of our crew members! The largest ever recorded weighed close to a whopping 600 lb!

Octopuses are molluscs, belonging to the same phylum as clams, snails and chitons.  They’re also venomous, and with a sharp beak can deliver a nasty bite if provoked.

Arm or tentacle? Octopuses have eight arms, each of which has two rows of suction cups the entire length of the arm. Squid, on the other hand, have eight arms and two tentacles, which only have suction cups at the end. Males have one modified arm, used to deposit sperm packets into the female.

These shy predators can be found anywhere from the intertidal zone to depths of over 1,500 ft. Like true introverts, giant Pacific octopuses exhibit a preference for staying in their dens unless enticed to exit by the possibility of a meal.

Preferred prey includes crabs, clams, shrimp and fish, but they’ve also been known to go after birds, like this octopus photographed just off the Victoria breakwater a few years ago attacking a gull.

Octopuses, and the giant Pacific octopus in particular, are expert escape artists. They’ve been known to pry the lid off their tank, climb out and cross the floor, climb up to another tank containing a tasty treat, remove the lid, capture their prize and then make the return journey home (sometimes to the great puzzlement of their caretakers who wonder where the rest of the animals have disappeared to).

Not only can they get out of things; they can also get into them. Common enrichment for captive octopuses in aquariums includes making dinner a bit harder to get to, using puzzle boxes and even things like child-proof pill bottles (which, let’s face it, are sometimes hard for even adults to open!).

A well-publicized escape is rather hilariously described here.

Like other cephalopods (which include the squid, octopus, cuttlefish and nautilus), they’re masters of camouflage. Their skin is covered with small coloured cells called chromatophores, under which lie reflective iridocytes. Expansion and contraction of these cells (under direct control of the brain) causes colour to change very quickly.

They can also change the texture of their skin which allows them to very easily blend into their surroundings.

The giant Pacific octopus lives only 3–4 years; females will lay eggs and tend to them, fanning and oxygenating them while fasting, and then will die. Now that’s devotion to one’s offspring!

Cephalopods have large, complex brains and well-developed nervous systems, with the capacity for long-term memory, learning, tool use and problem-solving. They also exhibit very distinct individual personality traits. Their intelligence and excellent eyesight can sometimes make them seem quite alien as they observe us observing them.

Want to learn more? Here are a few links:

Special thanks to Jeff Reindl and the Shaw Centre for the Salish Sea for the photos.

“We have a lot of work ahead of us. It's important that we power ahead… 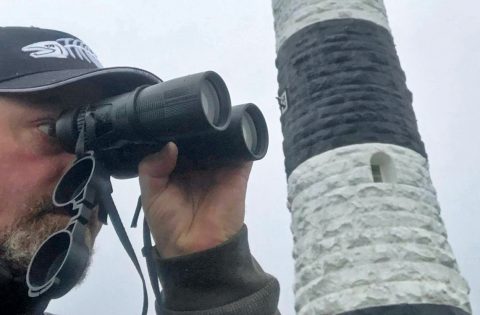 What’s it like to be a Race Rocks ecoguardian?

Sustainable Whale Watching Around the Globe – Interview with…

Sustainability is at the core of all we do here at Eagle Wing Tours, and…