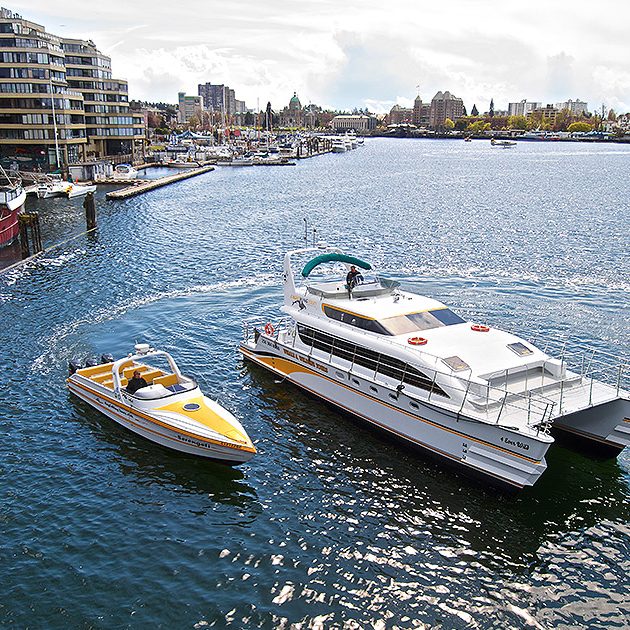 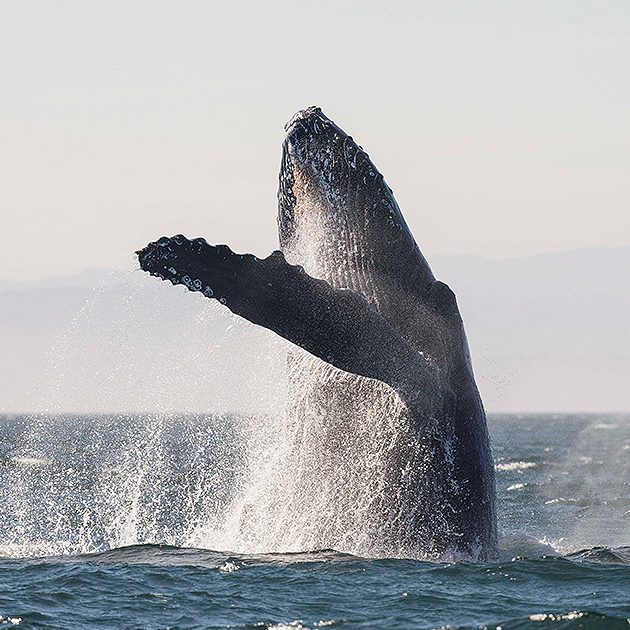 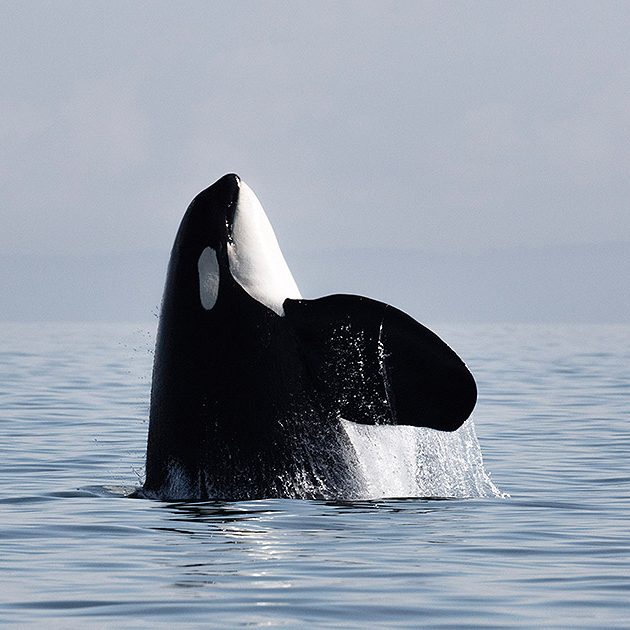 The largest vessel in the fleet, Perfect for all ages, build unforgettable memories together!…. 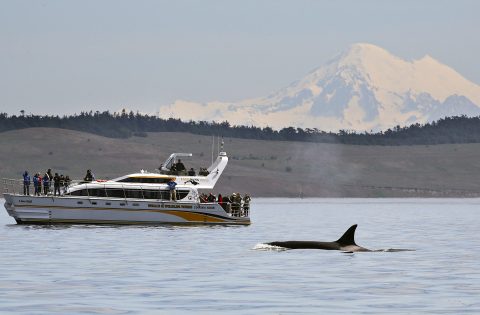 Our beautiful 4 Ever Wild catamaran offers protection from the weather and open-air viewing!

Ready for an adventure? These mid-sized open-air boats pack some speed!….

The largest vessel in the fleet, Perfect for all ages, build unforgettable memories together!….

Our beautiful 4 Ever Wild catamaran offers protection from the weather and open-air viewing!

Ready for an adventure? These mid-sized open-air boats pack some speed!….

Thrilling sights from our daily tours

Today has been wonderful! It may have been chilly but the cabin definitely helped. We got to see a couple humpback whales, eagles, California sea lions. We also stopped at Race Rocks Ecological Reserve and saw Steller sea lions, harbour seals, and more California sea lions as well as a bait ball!

Welcome everyone to Fisherman’s Wharf and the Salish Sea. We’re privileged to work, play and educate thousands of people every year from all over the world. We’re able to do this on the traditional territories of the Lekwungen-speaking peoples of the Songhees and Esquimalt Nations.

We’ve implemented many new health and safety measures. We want you to have an outrageous amount of fun on your tour—but to do it safely.

Our Home - The Salish Sea

Environmental stewardship and marine conservation are our core values, both on and off the water!

On the off-chance that we don’t encounter any whales on our tour (May 1 to Nov 30), we invite you to come back (for free!) until you do! Explore – Inspire – Conserve

Cancellation Policy: Our usual cancellation policy is 48 hours before your tour. However, we understand that unforeseen circumstances can pop up. If this happens, we kindly request that you communicate with us via phone or email as soon as possible!

The Catamaran was thrilling, we didn’t know a boat could move that fast!

This summer I took my girlfriend whale watching with Eagle Wing Tours in Victoria, the high-speed Catamaran was thrilling, we didn’t know a boat could move that fast!

We spent most of our time beside the captain, there’s lots of room inside and out!

It seems on every corner, there were guides sharing all kinds of interesting facts, we weren’t bored for a second!

I would definitely recommend this company to my friends and family, we can’t wait to go again!!

Brilliant! All the crew were fantastic, very knowledgeable. Covid protocols were strict and fair and you felt so safe on the boat.
Everything was done to make sure every single person had a great experience.
10/10 would definitely go again!

WOW…I don’t even have the words!

WOW…I don’t even have the words that can explain how amazing our experience was. The guides were very knowledgeable and friendly, and we couldn’t have asked for a better sighting. Killer Whales, Harbour Porpoises, Harbour Seals, Puffins and to top it off a juvenile & mother Humpback Whale. Thank you Eagle Wing Tours.

Only wish I could share the videos of Whales Breaching.

The crew was all about “safety first”

We would HIGHLY suggest you take your whale watching business to Eagle Wing Whale & Wildlife Tours! Not only did we have a fantastic time aboard a very clean and comfortable vessel, but also we’re lucky enough to see some of the most majestic animals the world has to offer – namely Orca whales, Humpback whales and seals! The crew was all about “safety first” and provided some great information for those of us who are not well-versed in all things whale! We saw what the other companies have to offer but think you should go with Eagle Wing like we did!

Look no further, Eagle Wings is the one for great fun and whale watching!

This is a must if you are in Victoria, BC. Our cruise was 3 hrs, 45 minutes long and we did see 3 different species of whales, Minkes, Orchas & a Humpback. The boat is fast and comfortable and rides the ocean with very little rocking. There are plenty of places to sit or stand and the open deck design allows everyone to have a good view spot topside with places to stand along the side, the bow or the stern and a few spots on the bridge with the captain. The staff is very passionate about their job and can identify the whales by pod and name. Eagle Wing staff are very into the conservation of their local whales.
Our cruise was on Sunday Sept 27th and the air temp was 58 – 61 F and the sun was shining. Even under these great weather conditions it does get very cold on deck when the boat is underway, so bring a jacket and gloves and something to cover your ears if you plan on being outside while underway.
Our cruise started out spotting Minke Whales about 15-20 minutes into the ride out to San Juan Islands. Once we reached the San Juan Islands we hooked up with the K pod of Orcas and spent probably an hour with them. On the way back to Victoria harbor near Discovery Island we ran into a humpback whale and we hung around for another 30 – 40 minutes.

Other +’s for using Eagle Wings, they are located at the Fisherman’s Wharf which has 4 or 5 places to get something to eat after the cruise pl,us there are some Harbor Seals that hang around and people feed them so you can get some pretty closeup shots of harbor seals.
Enjoy your day whale watching.

Went on a tour in February–Above and Beyond!

Most amazing experience ever! The staff was incredible and really went above and beyond! I went on a winter tour in February and despite only having 8 people they still took us out! I got to see orcas, sea lions, and seals and learned so much from the crew as well! Probably one of the best experiences I’ve ever had, thank you so much Eagle Wing staff for the amazing tour!!!

To say we had a blast would be a huge understatement!

I don’t think this experience could’ve been any better!! We were on the last tour of the day. They provide everyone with pants, a jacket, hat, and gloves (You’ll definitely want to take them!) before getting everyone onboard. Our guide was absolutely fantastic and did a great job of finding a large pod of Orcas right off the bat. He had so many interesting facts and stories to tell us as we followed the pod around, which eventually nerves with a second pod. After that, we zipped off to see 2 humpback whales doing tail flops! It was so impressive! We finished off the tour seeing sea lions and other wildlife before heading back to the dock as the sun was going down. To say we had a blast would be a huge understatement! I can’t recommend Eagle Wing Tours enough!

Eagle Wing Tours is a top rated tour for a reason!

Eagle Wing Tours is a top-rated tour group for a reason! Checking in and paying online was easy. The boat was modern, clean and had plenty of room to sit comfortably inside and out. The staff was a wealth of knowledge, passionate, extremely friendly and easy to talk to.  The companies conservation initiatives are commendable and they encourage everyone to become more involved in the education and conservation of a sustainable, healthy, and more balanced marine eco-system.
We met a man from the prairies who loves photography and has been on the boat several times as he books a tour every time he visits Victoria…that really says something about this experience. I highly recommend this!

This tour blew us away! Really surpassed our expectations!

I’ll admit that when we showed up, my expectations were a bit low. We’ve been on plenty of excursions and it’s rare that they live up to the lofty expectations. Stepping off the boat 3 hours later, it has lived up to the hype!

We got to the wharf about 20 minutes before the boat left. A nice perk was that they picked us up from the hotel – it was only about 5 minutes from downtown but it was a nice nonetheless.

Once there we had about 15 minutes to burn. A number of the businesses in the area offered a 10% discount for people in the tour, so we went and grabbed a coffee. Quick jaunt up a ramp and caffeinated we went!

The trip varies from 3-4 hours depending on what you see and where. We got super lucky and saw some beautiful animals almost right away! Over the time we saw a couple of types of Orcas, Humpback whales, Harbor seals, a Steller Sea Lion, Elephant Seals, and a couple of Eagles. It was seriously as good as we could have hoped for! The water was calm and the boat very comfortable. It’s pretty chilly on the water so consider wearing pants and bringing a light jacket.

Inside the boat, there was indoor and outdoor seating for roughly 55 people in total. They provided coats, hats, and mittens for everyone who wanted them. Snacks and beverages were available for $2 each. There were 4 or 5 naturalists on the boat who kept us up on everything that was going on and gave great information about the species we were viewing.

In addition to sea life, the views of Mt. Baker, the Olympic Mountains, a number of islands and the coast were spectacular! On a nice day, there’s nowhere better than the NW and being on the water elevates it.

This tour blew us away! The whole thing was spectacular and really surpassed our expectations – Keep up the great work! 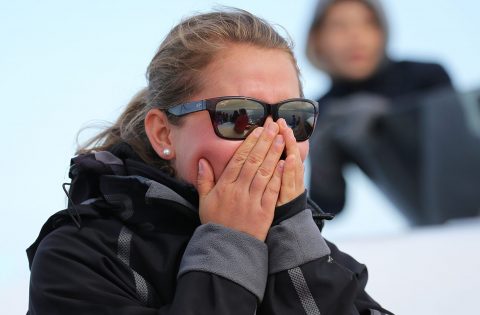 TripAdvisor has voted Eagle Wing Tours #1 since 2007  for whale & wildlife watching in Victoria, BC on Vancouver Island. We respect the investment our guests make to join us and we are dedicated to making your trip the experience of a lifetime.

We focus on delivering every guest into the supernatural realm of the Salish Sea, introducing you to orca whales, humpback whales, minke whales, seals, sea lions, and the diverse variety of local marine animals who call Victoria, BC their home. We’re bringing the wild to life onboard our “Floating Classrooms”

View our Whale and Wildlife Tours

Eagle Wing Whale & Wildlife Tours is proudly Canada’s first 100% carbon-neutral whale watching company and the first to support the 1% For The Planet initiative; we donate a minimum of 1% of our annual sales to environmental programs! Excited about sustainability? Sign our Go Green pledge and start making a difference! Don’t take our word for it – we have won numerous awards. Twice winning Canada’s Top Sustainable Tourism Business!

The natural world has massive demands being placed upon it. As stewards of the Salish Sea, we actively work to protect the marine ecosystem we love. We are privileged to work in the presence of natural beauty and feel it is our duty to help make sure it will be here for generations to come. Our tours are fun and educational, which greatly enhances the value of the experience! As compassionate mariners, educators, entertainers, marine stewards, Eagle Wing Tours inspires the conservation of our marine environment, with a thrill! R U Wild 4 whales and wildlife?

Learn about our Conservation Initiatives

Eagle Wing Tours is Victoria, BC’s very first premier Guaranteed Adventure and Whale Sighting company. We literally do go the extra mile (or 50!) for our guests.

Between May and November, the chance of seeing whales is 95–98%, but if you don’t see any, we invite you back on complimentary tours until you see whales! We go above and beyond for every departure, maximizing guest satisfaction, overall comfort and delivering the exceptional experiences! Every boat has many extras and on-board hydrophones so you can listen to the whales!

We use technologies such as cookies to track the success of our advertisements, understand how visitors use our site, and improve your browsing experience. Learn More…